Most people, even handymen, know very little about ceiling fans and how they should be operated/maintained to be most effective at doing there job even though they can be found in almost every household in America.

Get step-by-step instructions for the most common ceiling fan issues.
Start Diagnostics Tool

Some of the most common issues with ceiling fans:

If the problem with your ceiling fan is a simple one, it’s definitely worth fixing yourself. It will save you the $50 it will cost you to get an electrician to look at it and possible the cost of a new fan. But it is somewhat difficult to perform repairs on fans, so if the problem is electrical or internal it is best to have someone who is qualified perform the work.

If there is power to the switch but the fan won’t turn on, the problem is something with the fan itself. Next check if the lights on the fan work. If the lights work but the fan does not work it may be the reversing switch. Check the switch and make sure it is not between settings and fully one way or the other. Another possible problem are the pull chain switches. Read the section below, “Pull Chain Issues”, for more on this.

Again, if power is making it to the fan but it won’t turn on, it could be a loose wire in the fan housing. Here’s how you check for loose wiring in your ceiling fan:

If your fan is noisy it is often the motor, which is very common for aged fans. In a lot of cases, the best option is to replace the fan if you cannot stand the noise. Installing a dimmer switch for your fan can increase its life by allowing you to maintain a proper amount of power to the fan. If there is a rattling in the fan check to make sure everything is properly tightened.

If you are having an issue with your pull chain or it is stuck on one speed but is supposed to have several you can replace the switch:

If this doesn’t work, you may want to consult an expert or get a new fan if the issue is too much to deal with (parts and labor may be more expensive than a new fan).

Whether you go to a hardware store or choose to purchase your ceiling fan online, the number of choices that you are going to have is daunting. They may all look the same but a ceiling fan’s size and features can effect your experience.

For the ceiling fan to effectively do its job, it must be big enough to create an airflow throughout the room(s) it is circulating air through. In general, you want to follow the following size guidelines:

Following these loose guidelines will give you the best possible airflow and help reduce your energy bills. You can read more about choosing the correct fan here.

Before you go ahead and buy that cheap and attractive fan, you should make sure it isn’t lacking features. The features that consumers rate as the most important that aren’t always included:

When installing your fan you have the two obvious options of doing it yourself or having other people do it for you. If you would consider yourself a handy person you can probably replace an existing ceiling fan with a new one or even install a new one if there is already electrical going to the location you want the fan to be. But if you need a new switch or need to wire the new fan you will probably have to hire an electrician or be one yourself.

Hiring somebody to install it for you

If you choose to pay somebody else to install your fan for you, you are going to see a different price range based on where you are located, how hard it is to access the location where your new fan will be, and the condition of your homes wiring. If you buy the fan from a hardware store like Lowes or Home Depot you may be able to get a cheaper installation through the store, they will ask you about this. If you choose to hire a local handyman, check out these tips to ensure you get the job done correctly.

$50 – $215. If you hire a handyman to do the replacement for you and you can use an existing mounting box you are going to pay in the lower end of this range. If you want a new mounting box and the fan is in a location that is hard to reach you are going to pay in the higher end of the range. For the jobs that fall into the lower end of the range you may be about to just use Youtube or other online instructions to do it yourself and skip the appointment and cost.

​$150 – $350. For this kind of job you are probably going to have to get an electrician involved and they are going to have put new wiring in to get your fan working.

Since the pricing varies so much it is wise to get an estimate for your installation which is offered by stores like Home Depot and Lowe’s home Improvement.

If you decide to install the fan yourself then you probably already have the wiring going to the location where the fan will be. If you choose to do it yourself you are best off using the installation guide that every fan comes with to install the fan into your home since every fan is slightly different.

Here is a great video that shows, in general, what you can expect when installing your new ceiling fan. It goes very in depth:

The actual practice of operating your ceiling fan is very simple but most people do not know the best practices of operating a ceiling fan. In general there are two things you want to do:

Very simple, but most people do not realize that in the winter you can actually help keep your house warm and reduce your heating bill by using a ceiling fan properly. This is also why it is so important that your fan be reversible.

Fans, like everything else in your house, are going to get dirty. For the most part you can use a duster made for ceiling fans to clean your fan if you do it regularly. But if your fan is hard to reach or you just don’t get to it, you might opt to clean it less frequently which can be a little more involved. You are going to want to take down the blades and clean them with a cloth. Take the following steps to do so:

Get My Free Estimate 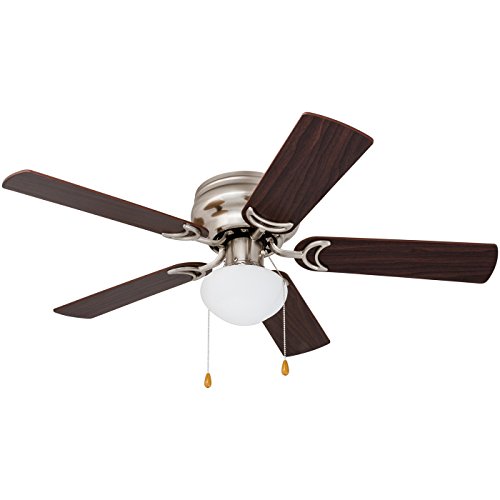